Toilers of the Sea: a summary 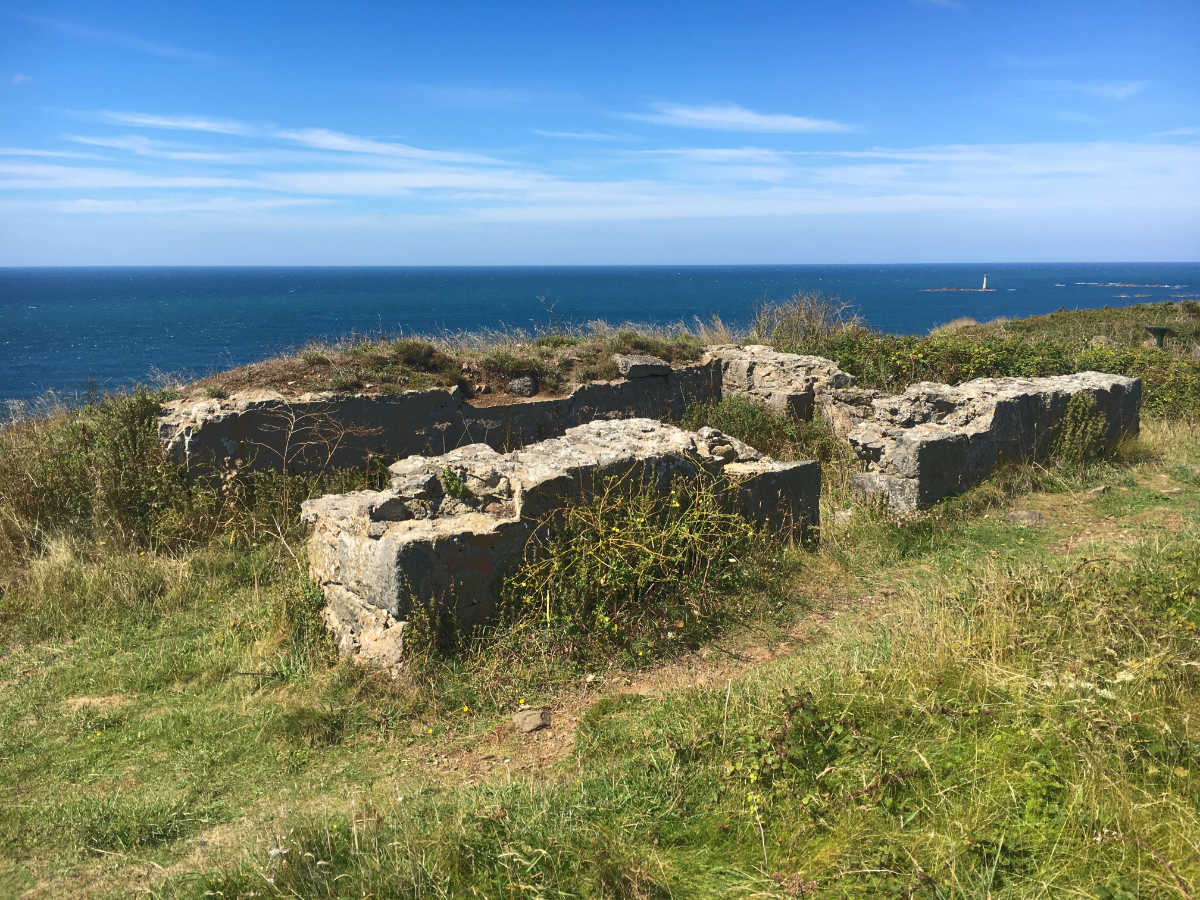 Above: The haunted house at Pleinmont that features in Toilers of the Sea

Toilers of the Sea tells the story of Gilliatt, who lives in the Bû de la Rue, a decrepit house in St Sampson. He arrived on Guernsey as a small boy, brought there by his mother, but where she came from nobody knows. She left him the house in her will, along with a chest full of women’s clothes that she said he should give to his wife when he married.

When he reaches the point where she stopped, he sees that she’s written his name in the snow, and he’s smitten. From that point forth, he watches her, and sometimes plays Bonnie Dundee his bagpipes, outside the house where she lives with her uncle, Lethierry. Lethierry is having none of it. He tells Gilliatt to stop wasting his time: Lethierry will never allow him to marry Déruchette.

Lethierry is a retired captain, who’s invested in a steam boat called the Durande. The local fishermen hate it, calling it the Devil Boat, and so do the priests, as it’s unnatural to bring water and fire together when God has set them apart. Nonetheless, under the captaincy of the trusted Clubin, it does a good trade, taking Guernsey products to the French markets quickly enough for them still to be fresh.

If it wasn’t for the fact that Lethierry had been robbed of his fortune by Rantaine, a poor French man that Lethierry had brought to Guernsey, he’d never have needed to run the Durande at all. Lethierry has come to love his boat, though, just as much as he loves his niece. It would be his dream to find a younger captain for his boat than Clubin, who could also be Déruchette’s husband, but on the whole he would be happy for her to choose her own husband – just so long as it’s not a man of the church.

At about that time, a priest arrived on the island. Ebenezer Caudray was to take over from the rector of St Sampson, who was moving to St Peter Port. Caudray would one day come into a fortune when his uncle, the dean of St Asaph, dies – if he himself should live that long, which he almost didn’t do. Exploring the island on his first day, he sat in a seat-shaped rock close to Gilliatt’s house, where people tend to fall asleep and drown as the sea rises. The priest, too, dozes off. Fortunately, Gilliatt, who has just won a sloop in a sailing competition, sees him while he’s out in his new boat, and rescues him just in time.

On his frequent trips to St Malo in the Durande, Clubin would stay at the Jean Auberge tavern, where he met captain Zuela, a man who helps fugitives escape the law. One day, Clubin sees Zuela talking to what looks like a Quaker among the St Malo rocks and, consequently, goes to a gun smith to buy a revolver.

Back on Guernsey, three boys are looking for birds’ eggs on the cliffs around Pleinmont when they come across the isolated, supposedly haunted house up there. They overhear men inside arranging for someone else – unnamed – to wait there for transport to Torbay in England courtesy of a man called Blasquoto, who’ll be coming from Bilbao.

Later that week, back in St Malo, the Quaker comes up behind a coastguard, who has been watching a ship anchored just offshore. The Quaker kills him, and a moment later, Clubin appears – with the revolver in his hand. He identifies the Quaker as Rantaine and demands that he repays the money he stole from Lethierry, with interest. Rantaine hands over a tin box with £3000 inside it. Clubin lets him go, but Rantaine says he’ll make sure Lethierry’s informed the debt’s been repaid.

Clubin set sail in the Durande the next morning, despite being warned by the locals not to do so. All the other boats are returning to port, but Clubin presses on, telling the drunk helmsman (who is only drunk from consuming a whole bottle of brandy that Clubin had hidden where he knew the helmsman would find it), to ignore the oncoming tempest. The boat runs around in this fog on what Clubin believes is the Hanois rocks, a mile from Pleinmont. The passengers and crew evacuate, but Clubin says they’re to leave him there, alone, or else the lifeboat will capsize. This had all been part of his plan, though. He wanted to steal the £3000, so had deliberately grounded the Durande, and planned to swim from Hanois back to Guernsey. They leave him, but as the fog clears, Clubin sees that he’s not on Hanois, but the Douvres, a series of isolated rocks too far from shore to swim. Nonetheless, he must try. He dives into the sea, where something grabs his ankle and pulls him down. He never comes back up.

When news of the grounding gets back to Guernsey, everyone thinks Clubin acted like a hero. The captain of a passing ship had seen no sign of him, but did describe the Durande as being wedged between the rocks and says that the engine may be salvageable. Déruchette says she will marry any man who can recover it, and Lethierry says that he would allow such a marriage to proceed.

That night, Gilliatt heads for the Douvres in his sloop. When he gets there, he strips anything useful from the Durande and organises it into piles in a cave. He makes another cave into a forge by starting a fire and directing the airflow over a large rock to feed the flames. He then goes out in search of food, and discovers a beautiful, other-worldly grotto in which the water is lit by a phosphorescence. He spots something ribbon-like in the deepest parts, but it retreats into the darkness before Gilliatt leaves.

He manages to free the engine and lower it into his sloop, but it takes two months, and another storm is on the way. He uses old planks from the Durande to create a breakwater, and when the storm passed he has one last scouting mission for food. He follows a crab back into the grotto and puts his hand into a crevice to try and catch it. As he does, a giant octopus snares him, wrapping five of its tentacles around him arm and body, and starting to suck his blood. He has just one chance to kill it, which he does, by slashing its head with his knife. While he’s washing his wounds in the water inside the cave, he spots Clubin’s remains. The tin box containing the £3000 is still strapped to his belt.

Gilliatt takes the money and sails back to Guernsey. He returns the engine and the money to Lethierry who says that he must now marry Déruchette. However, Gilliatt overhears the rector, Ebenezer Caudray, proposing to Déruchette, and Déruchette accepting, so he refuses. Lethierry insists, and hearing this, the rector makes plans to leave Guernsey alone. Before he does, though, Gilliatt sees them in Havelet Bay and convinces him and Déruchette to marry and go together to England. They do so, and Gilliatt gives her the clothes that his mother said he should give to his wife, explaining to her that he’s unlikely to ever marry.

He goes to the seat-shaped rock by his home where he’d saved the rector’s life, and sits there to watch Déruchette and the rector sail off to England, ignoring the rising water. By the time their boat disappears over the horizon, the water has risen over Gilliatt’s head. “Nothing was visible now but the sea”.

The image above, from the Collection privée / Musée des Lettres et Manuscrits, Paris, is Victor Hugo’s own drawing of the Durande, from November 1866.

Read more about Toilers of the Sea: a summary

Toilers of the Sea: a summary appears in The Sarnian, the explosive adventure series in which the discovery of a dead body on one of Guernsey's most secluded beaches blows the lid on a world of intrigue and deceit.

Toilers of the Sea: a summary in brief

Originally published in 1866 under the title Les Travailleurs de la Mer, Toilers of the Sea was dedicated to the island of Guernsey, where Victor Hugo wrote it during his time in exile from France. It is set just after the Napoleonic Wars.

Toilers of the Sea: a summary
Summary of the complete book on one page