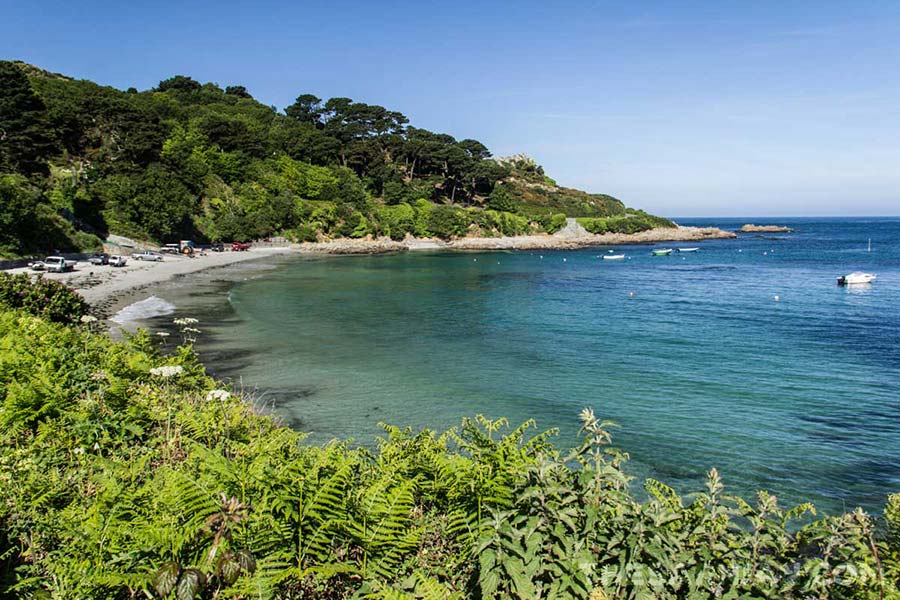 Portelet is a beach and small harbour on the south-western tip of Guernsey, where it sits in the parish of Torteval.

It is popular with holidaymakers, with shallow waters, interesting rocks and generally good sand — although this is darker here than on many of the other beaches around the island. If you’re an aviation geek, it’s also a place where you can also lie back and watch the planes coming in and out of the airport directly overhead — so long as the wind is blowing in the right direction.

Oliver Carey keeps his boat, the Huffin’ Puffin, tied up in Portelet Harbour, in the same mooring spot on the harbour wall as his father, Remus Carey did. Sampson, the cat, lives there, too. As explained in book 1, Dead in the Water,

The lazy sweep of Rocquaine Bay carried his [Ollie’s] view to Fort Grey – the Cup and Saucer, the locals called it, in a nod to the barrel-like keep and the circular wall running round it. To the left it curled back on itself, taking the road to Portelet and the small granite harbour that Ollie called home. His boat was moored there, just as it had been before he’d returned to the island and the Huffin’ Puffin had still belonged to his father.

A path behind the beach leads on to a pleasant walk past the lighthouse keepers’ cottages to the fort at Pezeries Point. It was open to traffic at one time, but the road has now been closed for years as it is eroding and no longer strong enough to take vehicles, making it a quiet, safe and very pleasant route. Its meandering course takes it around the edge of the Pleinmont nature reserve.

A cobbled slipway leads down to the sand from a kiosk (below), which sits in a small, sheltered garden at the end of Rocquaine Bay.

At the back of the bay there is a small granite hut (below), which Remus Carey uses as a storehouse, unloading important documents and other belongings into it before heading off in the Huffin’ Puffin on what may turn out to be more risky assignments. Although Ollie and his mother, Odette Carey, don’t know of his ownership of the hut, it becomes an important factor in book 2, Blowfish.

Portelet Bay and Harbour appears in The Sarnian, the explosive adventure series in which the discovery of a dead body on one of Guernsey's most secluded beaches blows the lid on a world of intrigue and deceit.

Portelet Bay and Harbour in context

Portelet Bay and Harbour in brief

Beach and small harbour in the south western corner of the island. Remus Carey used to keep his boat, the Huffin’ Puffin, moored here. When he went missing and his son, Ollie, returned to the island, Ollie took over the boat, repaired it and now lives on it at the same harbour mooring.

Pezeries
Headland on the south western tip of the island

Chouet
Beach on the North West of Guernsey