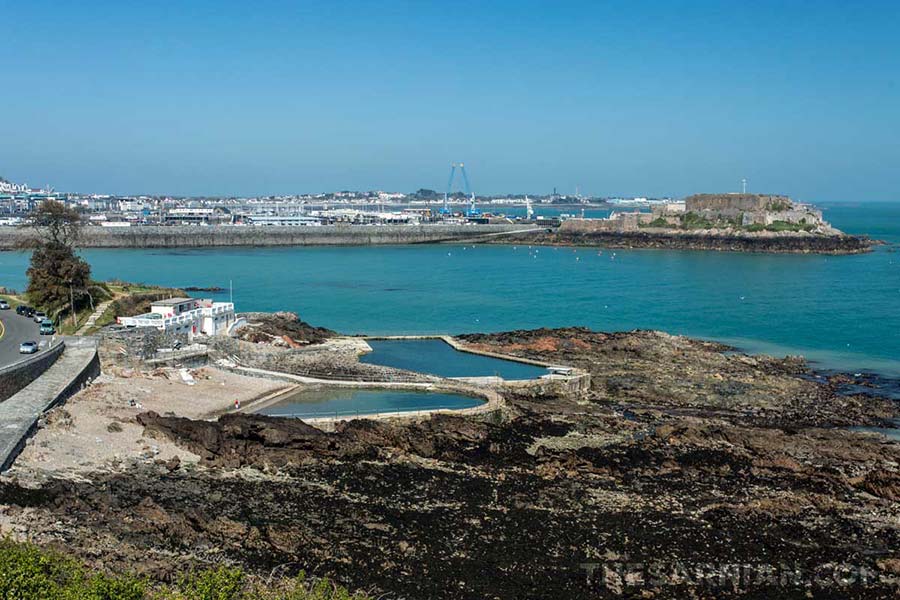 Havelet Bay sits close to St Peter Port and is centred on the bathing pools at La Vallette.

The area close to it is better known to those who fish as Cowhorn, and thus takes its name from the headland known as Cow’s Horn, upon which Clarence Battery was built. Remus Carey refers to it using this name when he is testing whether Marc Renouf has any knowledge of boats and boating around the island in book 1, Dead in the Water.

It features at the end of Toilers of the Sea by Victor Hugo, where he describes it thus:

This little harbour (which is the signification of the word) was near the town, but was so solitary that it seemed far off. This solitude was owing to the shelter of the high cliffs of Fort St. George, which overlooked this retired inlet.

The Havelet was accessible by several paths. The most direct was along the water’s side. It had the advantage of leading to the town and to the church in five minutes’ walk, and the disadvantage of being covered by the sea twice a day. The other paths were more or less abrupt, and led down to the creek through gaps in the steep rocks.

Even in broad daylight, it was dusk in the Havelet. Huge blocks overhanging it on all sides, and thick bushes and brambles cast a sort of soft twilight upon the rocks and waves below. Nothing could be more peaceful than this spot in calm weather; nothing more tumultuous during heavy seas. There were ends of branches there which were always wet with the foam.

In the spring time, the place was full of flowers, of nests, of perfumes, of birds, of butterflies, and bees. Thanks to recent improvements, this wild nook no longer exists. Fine, straight lines have taken the place of these wild features; masonry, quays, and little gardens, have made their appearance; earthwork has been the rage, and taste has finally subdued the eccentricities of the cliff, and the irregularities of the rocks below.

Havelet Bay appears in The Sarnian, the explosive adventure series in which the discovery of a dead body on one of Guernsey's most secluded beaches blows the lid on a world of intrigue and deceit.

Havelet Bay sits close to St Peter Port and takes its name from the Cow’s Horn, which is the headland that juts out into the sea on which Clarence Battery is built.