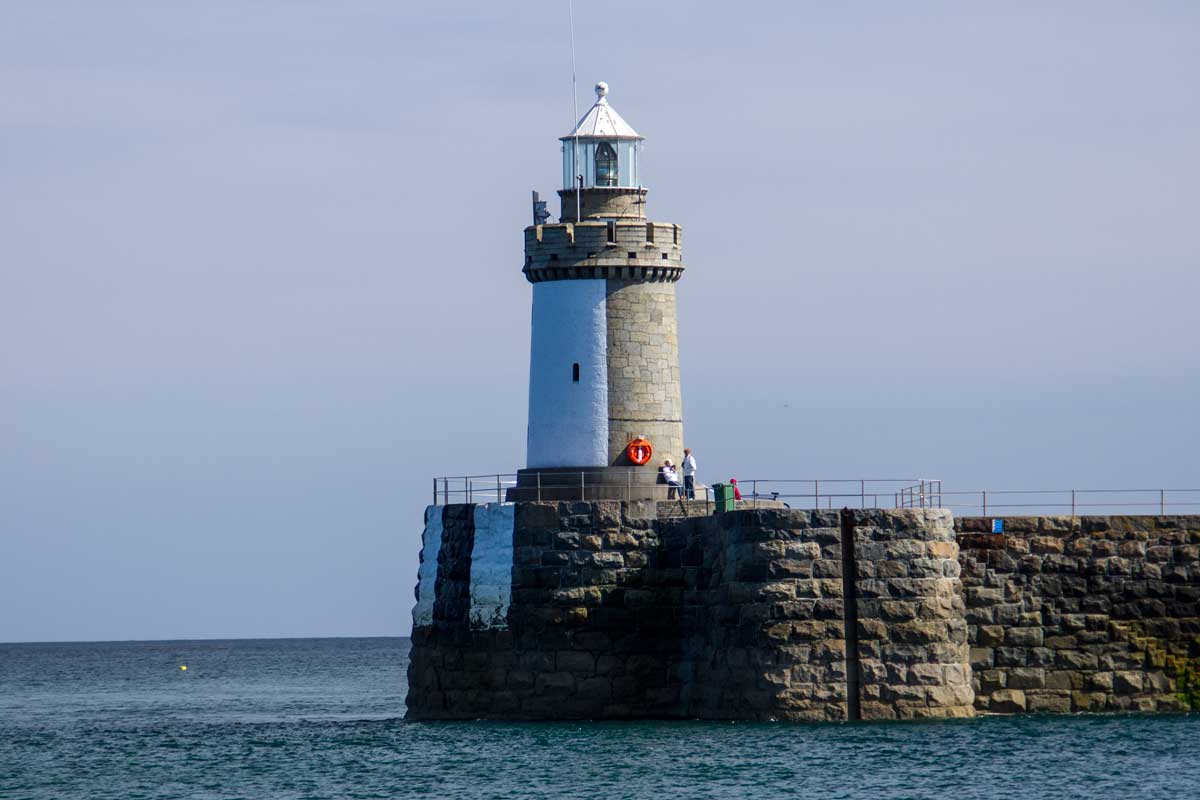 Castle Breakwater links the main part of St Peter Port to Castle Cornet, and forms one arm of Guernsey’s main harbour. It is a very obvious and prominent feature in Town. There is a lighthouse at the end, which is a very popular spot from which to fish, and also an advantageous place to stand when viewing the annual air display.

From time to time the breakwater is damaged in storms, at which point it may be closed to the general public. Damage of this kind was the premise for one of the major threads in The Sarnian 2: Blowfish, when the damage tore away a deep section of the stonework and revealed what appeared to be the body of a German soldier from the Occupation during the Second World War.

Above: door of the lighthouse at the end of Castle Breakwater

The breakwater was built in the second decade of the 1800s. At that time, many of Guernsey’s defences were being upgraded in response to a possible invasion of French forces under the direction of Napoleon. A generous pond for sailing model boats was added in 1887 to mark Queen Victoria’s Golden Jubilee.

The breakwater was one of the few parts of Guernsey to suffer aerial bombardment during the Second World War. The incident is recounted by Frank Falla in his Book The Silent War:

Suddenly, at five minutes to seven, the drone of approaching aircraft was heard. In seconds, the peaceful summer evening became a horrible nightmare. Six enemy aircraft came, it seemed, from nowhere. Three high fliers shot off on a recce from east to west over the island; they were the watchdogs. The other three swooped down over the harbour dropping incendiaries and high-explosive bombs, and machine-gunning ruthlessly along the line of waiting lorries.

We had no defence. The tide was low and the crowds rushed for the only shelter available, underneath the pier. This certainly saved hundreds of lives, but others were not so lucky. Some tried to shelter under their vehicles only to be crushed as the fires started and the vans and trucks collapsed. The blood of the wounded and the dying mingled with the juice of the tomatoes [in the trucks], and when I came on the scene, just as the last Hun plane faded into the distance the sight was one I shall never forget: the flames, the bodies, the cries of the dying and the injured, and the straggling line of people emerging from their shelter under the pier.

It is also mentioned in the book One Man’s War by Frank Stroobant:

As we heard the worsening hourly news we felt that we might have new experienced to meet. But it was a tremendous shock, all the same, when the Germans sent aircraft to attack us, and in their one and only raid on Guernsey killed 29 Guernseymen. The futility of the raid and the comparatively heavy casualties brought us face to face with stark reality, and I do not suppose there was one among us who did not thank God for this sign that we had done right in sending our families away.

Castle Breakwater appears in The Sarnian, the explosive adventure series in which the discovery of a dead body on one of Guernsey's most secluded beaches blows the lid on a world of intrigue and deceit.

Castle Breakwater was built in the early 1800s to link Castle Cornet to St Peter Port. It is largely made of granite and has a lighthouse at the end, which as well as being an aid to shipping is a popular spot from which to fish. It is occasionally damaged in very rough weather. This kind of damage was a key plot point in The Sarnian 2: Blowfish.

L’Ancresse
Common and bay at the north of the island