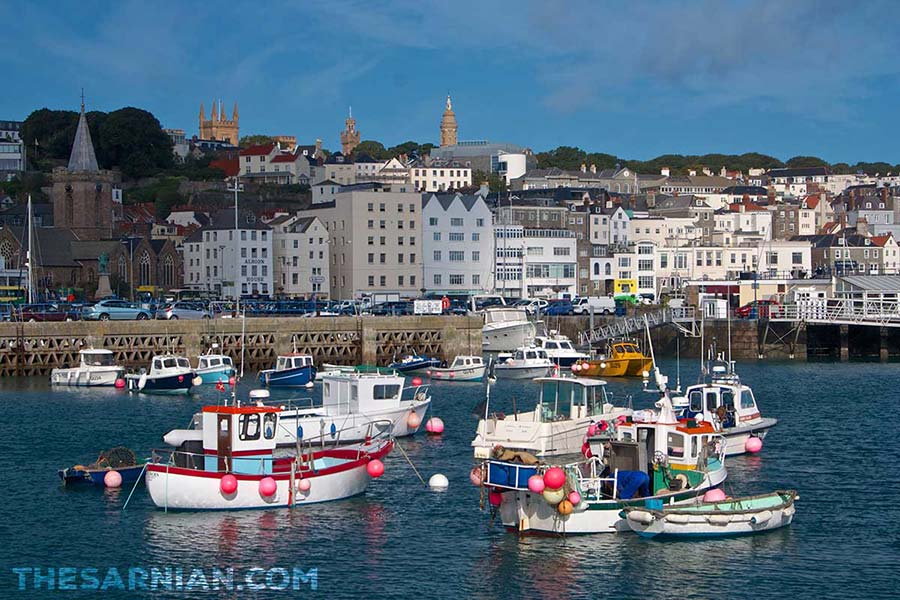 Known by locals simply as Town, St Peter Port is the largest settlement within the Bailiwick of Guernsey, and its main focus when it comes to shopping and business. Most of the island’s financial sector, which provides a major part of its annual income, is based in St Peter Port.

It is the location of the newspaper, The Sarnian, which has a building on the front. Freya Carlisle, the editor, has a glass office that over gives an unbroken view of the sea and islands.

The large harbour, is the primary landing point for visitors arriving by sea, and it also plays host to a large number of yachts, pleasure craft and fishing boats. The harbour opens out onto Little Russell, across which boats carry tourists to the neighbouring islands of Sark and Herm. Jethou is also visible from the front.

Notable buildings in the town include Hauteville House, where Victor Hugo spent his time in exile on the island. While living in Guernsey, he wrote Les Miserables and Toilers of the Sea, among other things. The latter of those books was read by Remus Carey in The Sarnian book 2, Blowfish. A statue in Candie Gardens, on the hill above town, commemorates his time on the island (see image below).

The house is now owned by the city of Paris, and tourists can visit, although a fee is charged.

Elsewhere, the town is remarkable for Castle Cornet, the Castle Breakwater and Town Church, all of which are worth visiting. There is a good selection of shops, and an old market hall with a pleasant paved square to the side. The market hall was once home to a traditional market with particularly good fish stalls on account of its proximity to the sea, but this has since gone and the hall is now closer to a small shopping arcade. Fresh fish can still be bought from a building on the quayside.

To the south of Town is Havelet Bay and the Cow’s Horn headland, on which Fort George and Clarence Battery is built. Immediately below this are the open air swimming pools at La Vallette.

Candie Gardens is one of few formal gardens on the island, and consists of lawns, lakes and semi-tropical plants, which grow well in Guernsey’s climate, which is generally more temperate that that of the mainland UK (see image below).

The Gardens mark one of the highest points in the town and the neighbouring streets give expansive views across the rooftops.

They also sit close to Police Headquarters, which is where Marc Renouf, Miles Bichard, Charlie Dubois and others are stationed on a permanent basis. Christine Le Page comes to join them on secondment from the force on the neighbouring island of Jersey at the start of book 1, Dead in the Water.

St Peter Port appears in The Sarnian, the explosive adventure series in which the discovery of a dead body on one of Guernsey's most secluded beaches blows the lid on a world of intrigue and deceit.

As the largest town and capital of Guernsey, St Peter Port is the main focus of the island’s commercial activities. It benefits from a large harbour and is also the landing point for ferries and cruise ships arriving there. It is the island’s main shopping hub for non-food products.

Channel Islands
A collection of islands off the Cherbourg Peninsular

The Guet
Watchhouse on a high escarpment behind Cobo Bay