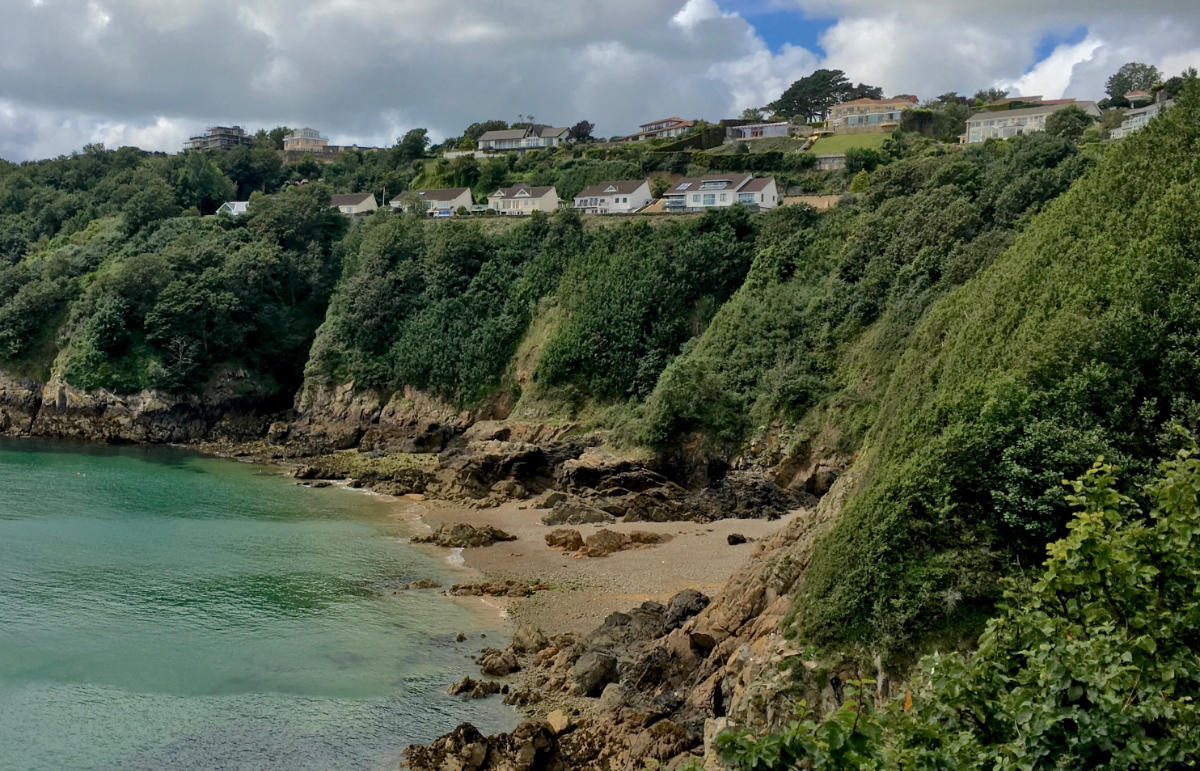 Fort George is an area that stretches from the steep Val Des Terres, which cuts south west from St Peter Port, to the cliffs that overlook Havelet Bay. Paths cut along either side of it, with the path along the sea front leading through the Bluebell Wood.

Clarence Battery sits at the most northerly point of Fort George, from which the view stretches across the outdoor bathing pools and Castle Cornet, as far as St Sampson.

Work on building the former garrison of Fort George began in 1780 and took 32 years to complete, at which point it housed troops who were stationed on Guernsey to defend against Napoleonic invasion.

According to Thomas Bellamy’s Guernsey Pictorial Directory and Stranger’s Guide,

It will admit about three thousand men, and has thirty-four pieces of cannon, four mortars, and a caronade. Most of the batteries are erected in a form for repelling the enemy at sea, and some of them are very formidable. From the ramparts or parade ground there is one of the most extensive and diversified prospects in the island; and underneath the former are spacious casemates, which in case of a siege can be converted into barracks. It was completed in the year 1812, at a national cost of 200,000l., but was commenced immediately after the breaking out of the American war, in 1782.

Very little evidence of the area’s former use can be found today, aside from the remains of the Clarence Battery. The rest of it was destroyed by an RAF airstrike in 1944, the day before the Normandy landings, and it remained derelict for some time until, in 1958, being sold by the War Office to the States of Guernsey for £25,000.

According to the book Guernsey, by GWS Robinson:

A committee of the States recommended in 1960 that most of the site be sold off for high-class residential development; this sparked off a controversy which roused high feelings at the time. A petition attracted over 10,000 signatures; but the contractors offered over £100,000 and the development has gone ahead.

Fort George appears in The Sarnian, the explosive adventure series in which the discovery of a dead body on one of Guernsey's most secluded beaches blows the lid on a world of intrigue and deceit.

Fort George was built between 1780 and 1812 as a garrison to house troops that would defend Guernsey against a French invasion led by Napoleon. The most visible remains of it are now the walls of the Clarence Battery that look out over St Peter Port as the rest of the site has been developed as a luxury housing estate.