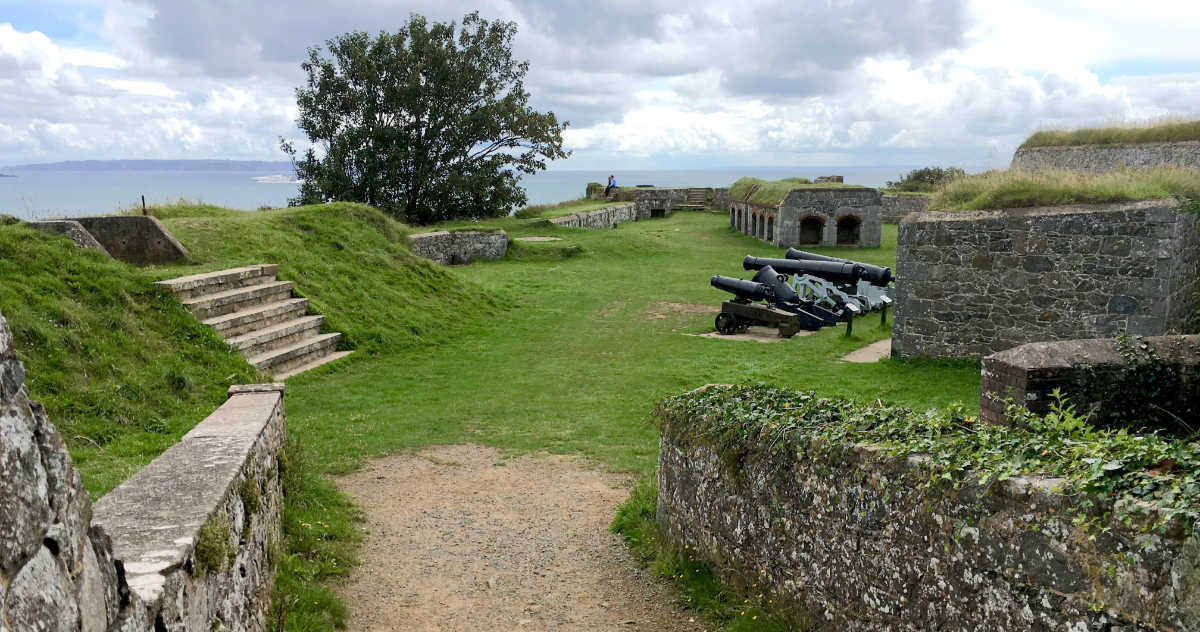 Clarence Battery was built in 1870 and was once part of a larger fortification that took in the area of Fort George. It is well preserved and consists of numerous armouries and thick walls, which would have give it protection when under attack. It was renamed in honour of George III’s son, Clarence, in 1815, having previously been called Terres Point Battery. (George himself gave his name to Fort George.)

Its position above the aquarium at La Villette gives it a commanding view across St Peter Port, Little Russell and Castle Cornet, along with the Castle Breakwater. The open air bathing pools at La Vallette are immediately below it, as can be seen from the picture below.

The position was an obvious spot for a defensive structure, so it’s no surprise that it was built when the French Revolution was at its height, and was used by the German occupying forces during the second world war as the site of the Luftwaffe’s early warning system.

Clarence Battery appears in book 2, Blowfish when Alton Hollett stands by the wall with his binoculars and looks down on the damage that a storm has caused to the Castle Breakwater.

He continued along the front, past all the signs of the town’s bombardment. The outdoor pools were filled with seaweed and rocks, and the road that led by them, up to the small aquarium, was strewn with detritus awaiting collection. The pavement was still submerged here and there, and he skipped out onto the road itself. He’d only brought one pair of shoes, which he couldn’t afford to get wet.

The map took him up to a set of stairs that led to a fort on a headland. He took them quickly, two at a time, and came out within the citadel’s walls, through which he could see right along the front. The building was incomplete, but better preserved than he’d thought it might be from the sign at the foot of the steps.

You will pass through Clarence Battery when walking south out of town on the coastal path that takes you as far as Jerbourg, via Fermain Bay, the Bluebell Woods and Marble Bay.

Clarence Battery appears in The Sarnian, the explosive adventure series in which the discovery of a dead body on one of Guernsey's most secluded beaches blows the lid on a world of intrigue and deceit.

Built in 1780, Clarence Battery was part of Fort George, and its position gives it a commanding view over St Peter Port, Castle Cornet and Little Russell.