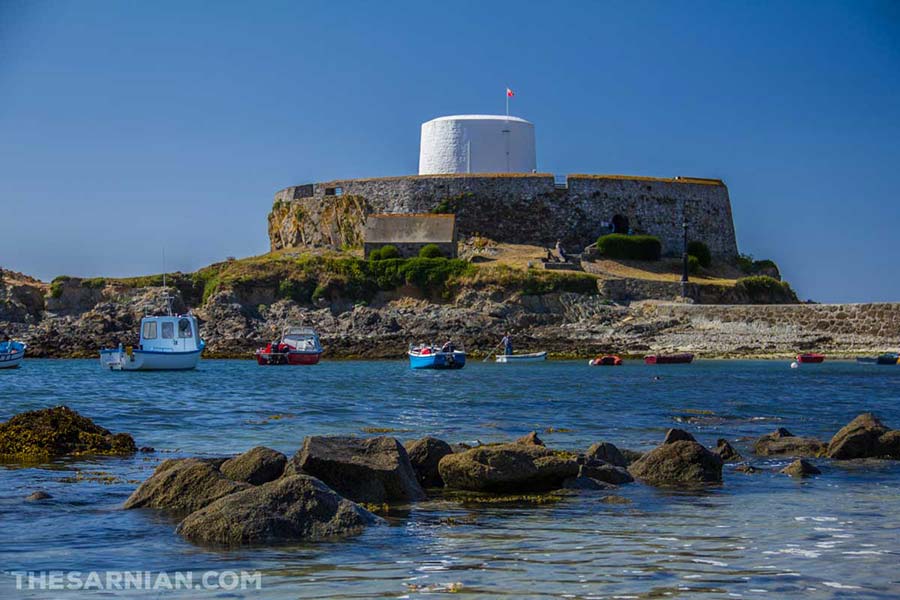 Known locally as the Cup and Saucer on account of its shape, Fort Grey is a Martello tower that has since been converted for use as a shipwreck museum. It is more accurately known as the Castle of Rocquaine (it sits by Rocquaine Bay) but was named after Earl Charles Grey, father of the Prime Minister of the same name, who was governor of Guernsey at the turn of the 19th century. (He’s also not the Earl Grey after whom the tea is named — again, that was his son.)

Ollie Carey can see Fort Grey from his boat, the Huffin’ Puffin, from its mooring in Portelet Harbour. Miles Bichard likewise tries tempt Christine Le Page back to his house for a drink after work with a promise of a view of the fort from his lounge, so he and Ollie would appear to live very close to one another.

A fort of some kind has been present on this rock since at least 1680 as there are records in the Royal Court library detailing the structure.

The States of Guernsey bought the present Fort Grey from the War Office in 1891 for the sum of £185. Less than 50 years later it had been taken over and put to use by the occupying German forces during the Second World War.

Fort Grey appears in The Sarnian, the explosive adventure series in which the discovery of a dead body on one of Guernsey's most secluded beaches blows the lid on a world of intrigue and deceit.

Fort Grey is known to locals as the Cup and Saucer, on account of its distinctive shape, which consists of a round white keep inside a circular granite wall. A causeway runs between the castle, which is now a shipwreck museum, and the west coast road.